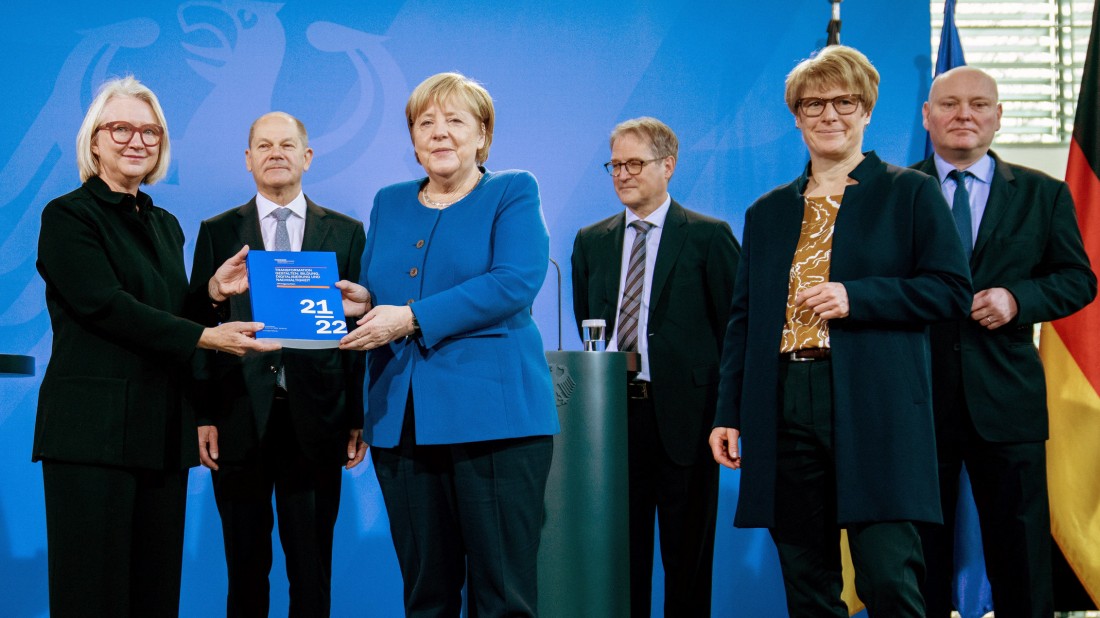 The so-called economic wise men have handed over their annual report to the federal government. Chancellor Angela Merkel (CDU) praised the title chosen by the Advisory Council to assess the overall economic development: “Shaping the transformation”, said Merkel, “precisely the task of the executive federal government and those who will form the new federal government” . For those who are now negotiating, the report could still give “inspiration”.

In fact, the economists Volker Wieland, Veronika Grimm, Monika Schnitzer and Achim Truger presented their report in the middle of the transition between the old and the new government. For the well-known sticking point on the way to a traffic light government – where the money for necessary investments should come from – the Council does not provide any joint inspiration. Instead, as previously reported, he puts “two approaches” up for discussion: Wieland and Grimm a stricter one, Truger and Schnitzer a looser one. When the report was presented, all four tried to make it seem like no big deal. It was not unusual to have different positions, said Truger and emphasized that he and Schnitzer found it useful to finance future-oriented expenses with loans and to use leeway such as borrowing from investment agencies. Wieland said that his ideal of policy advice would be to make joint pragmatic suggestions as to what had not been successful on the subject of fiscal rules. But he mainly attributed this to different diagnoses. While Truger and Schnitzer feared a restrictive fiscal policy in Europe that could trigger a new crisis, he and Grimm believed that stricter fiscal rules were necessary because in many EU countries the debt ratio has not fallen even in times of high growth and low interest rates.

While the experts were presenting their report, the Federal Audit Office warned of a crisis in the state finances in a report for the Bundestag on Wednesday. “What is needed now is an honest review, effective structural reforms and resolute priorities,” said Court of Auditors Kay Scheller. On the other hand, “loosening up or even abolishing the debt rule” would be the wrong approach.

Because of Ukraine, NATO threatens Russia with political and economic sanctions

3 out of 10 Koreans “willing to travel abroad within a year”… Hawaii, Australia, Germany