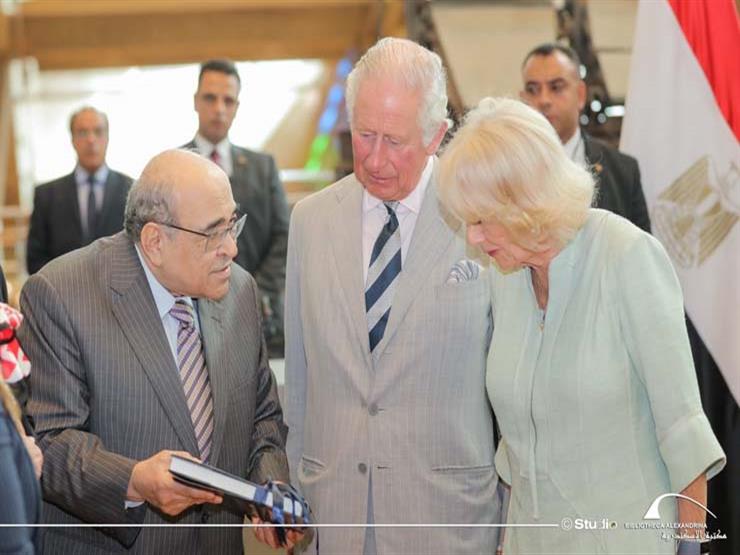 Prince Charles and Princess Camilla visited the Manuscript Museum, the Archeology Museum and the Children’s Library.

Prince Charles expressed appreciation and gratitude for the warm reception and hospitality he received in Egypt, and his keenness to visit her as part of his first official tour abroad on behalf of the Queen since the start of the “Corona” pandemic, in light of the specificity of the traditional relations between the two countries, in addition to the pivotal role The balanced played by Egypt in dealing with many international issues led by the President.

Prince Charles valued Britain’s interest in strengthening joint cooperation with Egypt in this context, to benefit from its experience in consolidating the role of religions as an incubator for positive social development that develops the individual’s awareness of his role and duties towards his society, its stability and development.

El-Feki said: The library is proud of this historic visit of His Royal Highness Prince Charles and Mrs. Camilla, for their visit to the library, and the inspection of museums and various cultural and artistic centers, as it is the oldest library in the world despite its interruption for 2000 years and then its return only 20 years ago, but according to the pattern that I started with it from the beginning.

Al-Fiqi added: “Prince Charles” has a special place in the hearts of Egyptians and Muslims because of his clear fairness to the Islamic religion, in his well-known lecture, whether at Oxford University or at Al-Azhar Al-Sharif years ago.

He continued, “I had the honor of receiving him when I was the director of the British University on the day it opened.”

Al-Fiqi indicated that I am happy to share with him on his birthday despite the different years, as our birthday is one, adding that this visit comes on the birthday of President Abdel Fattah El-Sisi, all of these things confirm that this is a blessed visit.

Al-Fiqi gave the prince a set of books from the library’s publications.

The monastery of poems..when stories become a mirror of our consciousness

“The walls of isolation with the tooth of a pen” .. Why should we read in prison literature?