3500 lightning strikes and torrential rains.. Details of a difficult night experienced by Alexandria – video and photos 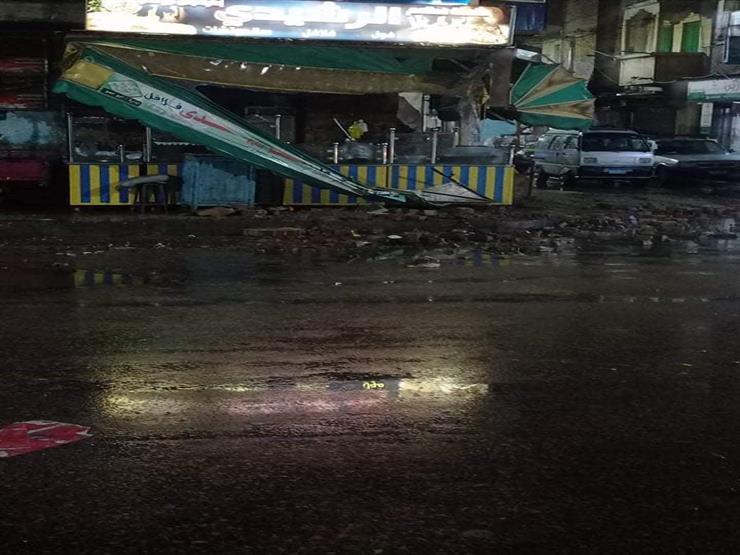 For 12 full hours, the thunderstorm accompanied by lightning strikes on Alexandria did not stop for only a few minutes, so that the coastal city experienced a difficult night, the likes of which it has not witnessed since the famous drowning incident in 2015.

Throughout the day, things seemed to be under the control of the sewage company and the executive bodies, despite the torrential rains that swept all the neighborhoods of the Bride of the Mediterranean.

The wave of bad weather coincides with the broom, the first severe episode with which winter begins, and it lasts for 4 days, accompanied by heavy rain and northwesterly winds sweeping the sea.

Major General Mohamed Al-Sharif, Governor of Alexandria, announced the continuation of raising the level of maximum preparedness and emergency in all executive agencies in the governorate, in order to deal with the state of instability in weather conditions.

No schools or universities

With the continuation of heavy thunderstorms and meteorological forecasts of more rain, Major General Muhammad Al-Sharif issued a decision to continue suspending studies in all Al-Azhar schools and institutes, “students and teachers”, today, Sunday, for the second day in a row.

This was followed by a decision issued by Dr. Abdel Aziz Qansouh, President of Alexandria University, to suspend studies and postpone exams in all faculties and institutes of the university, while continuing “online only” according to the study schedules.

The Alexandria Governorate hastened to issue an urgent statement to citizens, including 7 instructions and warnings that must be adhered to during the wave of bad weather, in order to preserve their lives.

The warnings included reducing the movement of cars and not parking over the “sinks” to allow sewage cars to raise rain water, avoiding high speeds of cars exceeding 60 km, maintaining a safety distance greater than usual, and not standing under old and dilapidated balconies.

By the evening, things got worse due to the non-stop thunderstorms – they reached the point of torrential rain – and the sewers and sewage hooks failed to absorb them, causing the sinking of most of the streets, whether high-end or popular.

Major General Mahmoud Nafeh, head of the Alexandria Sanitation Company, described that the city is subjected to unprecedented torrential rains in all neighborhoods, and the presence of rainwater gatherings, and work is underway to solve them as soon as possible – he said.

He added that the company’s emergency equipment and teams, company officials, are monitoring the situation in the field and working to raise rainwater pools and end citizens’ complaints for 48 hours continuously.

The streets are flooding

Heavy rains caused the flooding of a large number of coastal city streets, which are exposed to 18 cores over the winter, 11 of which are considered the most powerful and fierce.

According to the citizens’ distress and the reports received by the sewage operations room, the rainwater accumulations were concentrated in most of the city’s streets, including “Ameriya, Ibrahimiya, Muharram Bey, Toson, Smouha, El Max, El Bitash” and others.

The rain crisis extended to flood areas of the 21st kilometer on the international coastal road, “Alexandria-Matrouh”, and the fisheries bridge on the “Alexandria-Cairo” desert road.

The areas of Nag Al Arab Al Wardayan, Ascot and Ezbet Al Matar – most of them are popular neighborhoods and their houses are old – rain water entering the houses.

The heavy rains left huge losses after they drowned tons of goods at the Vegetables and Fruits Agency for “wholesale trade” in the Amreya region, west of Alexandria.

The merchants and sellers of clothes in Khaled Ibn Al-Walid Street in the Miami area, east of Alexandria, were not more fortunate, as most of them met the same fate after the rainwater level rose in the streets and reached the shops.

In view of the continued rain without stopping and the flooding of streets, Major General Mohamed Al-Sharif, Governor of Alexandria, quickly issued a new decision to suspend work, today, Sunday, in all government departments, except for water and sanitation facilities, ambulances, electricity and other necessary facilities.

The governor warned citizens not to leave homes except in the case of extreme necessity, and in the event of disembarkation, all safety procedures and announced instructions must be followed in order to preserve their safety.

Pictures of flooded streets and heavy rain in Alexandria topped the pages of social networking sites, throughout last night, amid calls for the night to pass peacefully.

A number of – non-governmental – pages concerned with the weather – including “Weather Network” and “Alexandria Rain” and others monitored the state of the weather firsthand, describing the situation as catastrophic in the coastal city, as the rains are very heavy, thunderstorms and non-stop, and a large accumulation of rainwater in the streets in a way that exceeds energy sewage capacity.

And “Weather Network” confirmed that until dawn today, Alexandria and its suburbs recorded more than 3,500 lightning strikes, which is the most in the entire region for a long time – according to its description.

Meanwhile, the balcony of an apartment in an old property collapsed in the Mina al-Basal area in the West Alexandria neighborhood, early this morning, Sunday, due to bad weather, without causing any injuries.