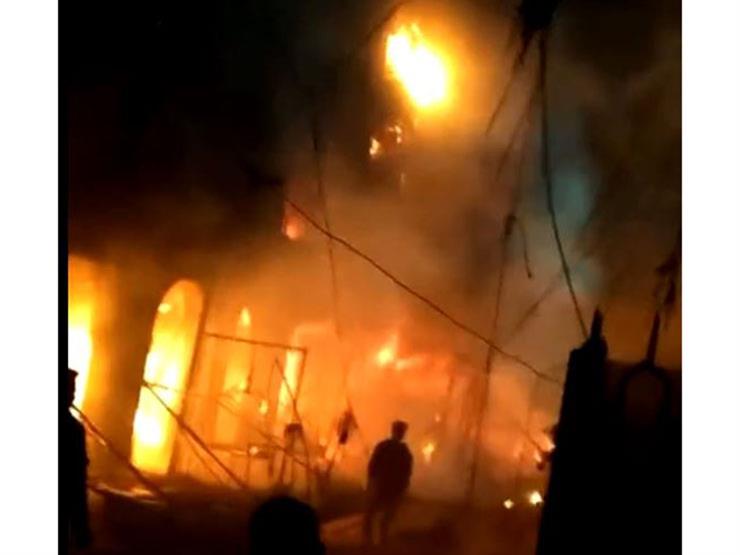 Yesterday night, and until the early hours of Monday morning, witnessed many important events at the local and international levels, the most prominent of which were the following:

On Sunday, the Ministry of Health and Population announced that 1974 people have been discharged from hospitals, recovering from the Corona virus, after receiving the necessary medical care and completing their recovery according to the guidelines of the World Health Organization, bringing the total of those recovering from the virus to 356,274 until today.

The aesthetic sky turns red and black.. What happens in the fire of Hussein? (photo)

The situation aggravated in a massive fire that broke out in the vicinity of the Imam Hussein Mosque in Al-Gamaliya neighborhood in Cairo Governorate, on Sunday evening. More than an hour after the fire broke out, the fire spread to the units of a 3-storey property, turning into a mass of flames amid a thick billow of smoke.

12 people suffocated .. the governor of Cairo reveals the cause of the fire in the vicinity of Al-Hussein Mosque

Major General Khaled Abdel-Al, Governor of Cairo, supervised the operations of extinguishing the fire that broke out on Al-Azhar Street behind Al-Mashhad Al-Husseini as a result of the burning of an electric cable that extended to two properties, and resulted in 12 suffocating patients who were transferred to Al-Hussein University Hospital.

Health reveals the importance of drinking water for people with corona

The Ministry of Health and Population revealed the importance of drinking a lot of water for a person infected with the Corona virus during the period of home isolation.

Minister of Awqaf: The fire of the Al-Husseini scene did not cause any damage to the mosque

The Minister of Awqaf commented on the fire that broke out a while ago in a building in the Al-Hussein archaeological area in Cairo.

The Ministry of Culture issued a strongly worded statement denouncing what it described as fraud and falsification of the exhibition’s audience and management.

3 tips from health to deal with the winter cold

The Ministry of Health and Population provided important instructions and alerts to deal with low temperatures during the winter season.

We have passed the peak of the cold… Meteorology: The temperature will return to normal levels on this date

Dr. Manar Ghanem, a member of the Meteorological Authority’s media center, announced that the weather conditions will continue to improve in the coming days.

Meteorology: An air depression hits the west of the country… and rain in these areas

The Meteorological Authority said that the latest satellite images indicate the beginning of the entry of the depression to the western regions of the country.

The Official Gazette published in its issue today, Sunday, 10 new decisions of Prime Minister Mostafa Madbouly, regarding a number of national projects and the allocation of plots of state land for public benefit.

What does the corona vaccine do to the human body? .. Health answers

The Ministry of Health and Population revealed the role of the Corona virus vaccine inside the human body to confront the emerging corona virus.

President Abdel Fattah El-Sisi dispatched Brigadier General Mahmoud Wahdan; To offer condolences on the death of journalist Yasser Rizk, and to inform his family of sincere condolences and sympathy.​

The Confederation of African Football (CAF) decided to reopen the Olympic Stadium in the Cameroonian capital, Yaounde, after a stampede that killed 8 people and injured 38 others, in order to hold the Africa Cup of Nations matches there.

Brazil: 18 dead in floods and landslides

At least 18 people have died in landslides and floods in the Brazilian state of Sao Paulo, state governor Joao Doria said Sunday.

The UAE Ministry of Defense announced that its air defenses had intercepted and destroyed a ballistic missile launched by the Houthi terrorist group towards the country.

The death toll from the powerful storm that swept parts of Europe rose to five on Sunday, after more accidents linked to strong winds were recorded in Poland and the Czech Republic.

A storm blew across northern German coastal areas, including Hamburg, overnight, disrupting train services and triggering flood warnings, said emergency officials, who rescued two men after a boat got stuck under a bridge in Hamburg.