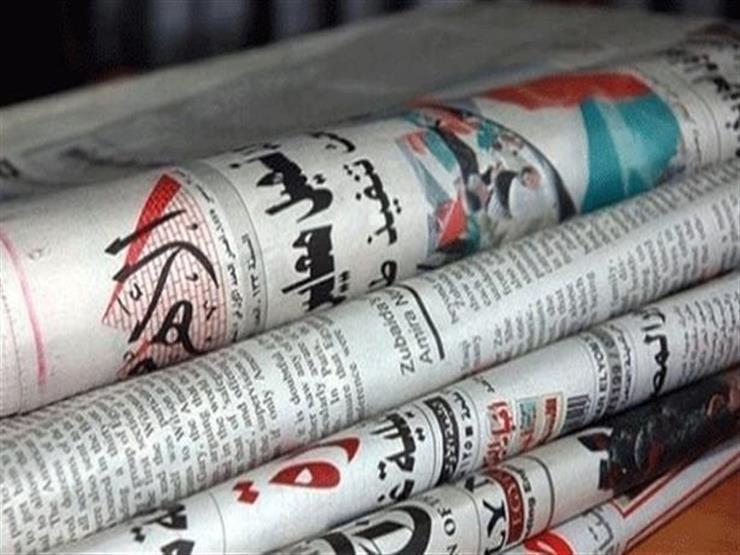 The expected summit between President Abdel Fattah El-Sisi and his Chinese counterpart Xi Jinping topped the headlines of today’s newspapers, in addition to a number of local affairs news, including the statements of the Minister of Education about the news circulating about the high school exams, and the Minister of Local Development’s assertion that there would be no increase in Prices of public transport and service vehicle rides after moving gasoline prices.

The headline of “Akhbar Al-Youm” newspaper said: “A summit between President El-Sisi and his Chinese counterpart,” while Al-Ahram newspaper titled “Sino-Egyptian summit in Beijing today.. El-Sisi and Xi Jinping are discussing ways to strengthen bilateral relations in all fields,” and in the Republic, “An Egyptian-Chinese summit to support Strategic Partnership and Discussing Regional Issues.

Akhbar Al-Youm newspaper indicated that President Abdel Fattah El-Sisi participated yesterday in the opening ceremony of the twenty-fourth Winter Olympics in the Chinese capital, Beijing, along with Chinese President Xi Jinping, Thomas Bach, President of the International Olympic Committee, and a number of heads of state and government.

The newspaper quoted the official spokesman for the Presidency of the Republic, Ambassador Bassam Rady, as saying that President Sisi’s participation came in response to the invitation of the Chinese President, in light of the close and strategic relations between Egypt and China.

“Akhbar Al-Youm” indicated that Ambassador Bassam Radi indicated that President Sisi will hold a session of talks with the Chinese President to discuss ways to enhance bilateral relations in a way that achieves the common interests of the two peoples and two countries, as well as continuing consultations and mutual coordination on a number of regional and international files of common interest.

Under the title “The Minister of Education resolves the controversy: All talk about high school exams is a fabrication,” and in statements to Al-Gomhoria newspaper, the Minister of Education, Dr. The Ministry will hold an official governmental press conference in the second semester, at a date that has not yet been determined; To explain the details officially after they have been settled academically and after consulting the relevant state agencies, and therefore there is no truth to any information before this conference.

And the Minister of Education added – in his statements to Al-Gomhoria newspaper – that the ministry is committed to the time map that it announced, and that there is no extension to the mid-year vacation, which officially begins today and will continue until Thursday, February 17, and that the secondary exams are on schedule and start on June 11 next, and the role The second on August 13, 2022.

Al-Gomhoria indicated that the General Administration of Examinations announced that the last date for registering the electronic forms for the general secondary school is February 24, and it includes all the subjects in which students will take the exams.

The newspaper quoted Dr. Tariq Al-Rifai, director of the unified government complaints system, that the system received and monitored 87,000 complaints and distress requests during last January, and finished examining and reviewing 85,000 complaints, and coordinating with all ministries and governorates to quickly overcome the obstacles facing their owners.

The newspaper stated that the ministry directed governors and traffic departments to intensify campaigns on parking lots and squares, and to deal decisively with any attempt to violate the previously established ride tariff.

“Akhbar Al-Youm” referred to the decision of the Automatic Pricing Committee for Petroleum Products to raise the current prices of all types of gasoline by 25 piasters and fix the price of diesel until the end of next March.

Under the title “Lieutenant-General Osama Askar discussed efforts to confront threats and challenges at the Conference of Chiefs of Staff of African States in Italy,” the newspaper highlighted the return of Lieutenant-General Osama Askar, Chief of Staff of the Armed Forces of War, to the homeland after his visit to Italy at the invitation of the Commander of the American African Command to attend the activities of the Conference of Chiefs of Staff of the States held in the Italian capital, Rome.

Al-Gomhouria stated that the conference discussed efforts to confront traditional and non-traditional threats and challenges related to organizations and groups that seek to undermine security and governance in the African continent.

Al-Gomhoria quoted the Chief of Staff of the Armed Forces’ war on the importance of developing areas of military cooperation between the armed forces of all African countries, and his reference to the consensus of visions on a common strategy to achieve the interests of the countries of the continent.

The newspaper pointed out that Lieutenant-General Osama Askar met, on the sidelines of the conference, with Lieutenant-General Stephen Townsend, commander of the American African Command, during which he reviewed a number of issues of common interest in light of the developments in the region and the challenges on the regional and African arenas.

She stated that the conference was attended by a number of chiefs of staff of African countries and a number of leaders of the Egyptian and African armed forces.

Under the headline “17 million pounds fine for mobile operators,” Al-Ahram newspaper highlighted the decision issued by the National Telecommunications Regulatory Authority to fine mobile operators 17 million pounds; For exceeding the standards of quality indicators for telecommunications services confirmed by the report of the results of the measurements of the last quarter of the last year, concerning the disclosure of indicators of the quality of voice and Internet service.

The newspaper pointed out that the agency announced, at the same time, the establishment of mobile phone stations in 500 villages, as part of the “Decent Life” initiative, at a cost of 1.5 billion pounds, financed by the Universal Service Fund.

Under the title “Abdel-Aty after the end of the Bahr Al-Baqar and Al-Hamam recycling projects: Egypt is the largest country in the world in reusing water”, Al-Gomhouria newspaper highlighted the assertion of the Minister of Water Resources and Irrigation, Dr. With 15 million m 3 / day.

The newspaper pointed out that the Minister of Irrigation made it clear that with the completion of water treatment and recycling projects in Bahr Al-Baqar and Al-Hamam, Egypt will become the largest country in the world in reusing water and the number of recycling times will reach five times, as well as transforming high-salinity wastewater from a problem to an opportunity to develop and meet water needs and the contribution of these projects In improving the environment east and west of the delta.

In the sports field, Al-Ahram newspaper highlighted the preparations of the first national football team for the final of the African Cup of Nations (Cannes), in which the Pharaohs will face Senegal tomorrow (Sunday).

And the headline of “Al-Ahram” says: “The team is studying the plan to face Senegal in the final (Cannes) tomorrow,” noting that the technical staff of the team led by Portuguese Carlos Queiroz turned the page on the victory over Cameroon, and immediately began preparing for the final match.

The newspaper stated that the team continued its training this morning, as the players who participated in the confrontation with Cameroon performed light physical exercises; For fear of being exposed to stress or injuries, while the group that did not participate or participated partially did strong training, and the technical staff focused during the evening training on the match plan.

Al-Ahram indicated that Queiroz warned his players of the danger of these matches, which he considers to be much stronger than the match against Cameroon in the semi-finals.

After Geagea’s refusal to appear before the judge.. Lebanon is facing the scenario of swapping the “Al-Moffa” investigations in exchange for “Tayouneh”

Because fear is not quite as negative as you think